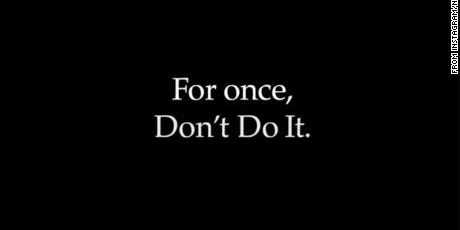 After recent events regarding the murder of George Floyd by a Minnesota police officer, many companies and organizations have gone public with their position on the matter including Nike.

Nike’s “For Once, Don’t Do It” clip incorporates the brands iconic “Just Do It” slogan to deliver a powerful message against racism. Nike recently shared the clip across all of its social media platforms.

The clip features a basic black screen with white letters. Some quotes from the video include: “For once, don’t do it. Don’t pretend there’s not a problem in America. Don’t turn your back on racism,”. This is not the first time Nike has spoken out on issues of social injustice. In 2016, Former CEO Mark Parker issued a letter to employees showing support for Black Lives Matter. The company also backed Colin Kaepernick making him the face of their “Just Do It” campaign in September 2018. Nike’s current CEO, John Donahoe has been constantly urging employees to take a stand against racism and police brutality as well.

Check out the “For Once, Don’t Do It” clip from Nike below.