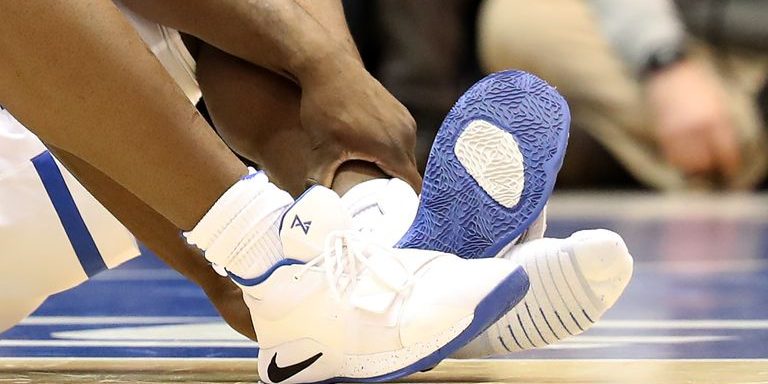 On Wednesday the 20th of February, 2019, one of the biggest brands in sports took a terrible fall. I’m of course referring to Zion Williamson’s exploding PG 2.5  and the  injury he sustained as a result of a simple, routine step towards his goals for that night. As expected, Zion’s misfortune triggered a torrent of comments and commentary. With opinions ranging from positive to negative and everything in-between. However, no single perspective can encapsulate the very real and representative nature of what occurred on one of the biggest nights in sporting history. As an elite athlete, Williamson is undisputed with a skill set that is only rivaled by the very best in the NBA. Yet, despite his immense powers everyone watched helplessly as the massive 285 pound prodigy crumbled to the court, his legs wide and his weight shifting to some of the most valuable knees in the world.

Everyone knows professional basketball players are compensated well. But when Wall Street prices a player into the equation of a multinational multibillion dollar corporation like Nike, the game is taken to a whole other level. So in the case of a player like Zion Williamson it Is not a far stretch to say -: millions of dollars worth of value could have disintegrated without solid logical justification. In that awful moment of clarity, we could all see Zion’s future was uncertain – just as it is for the majority of us who do not possess his gifts. This to me is also a lesson to the few exceptional individuals, atmosphericly wealthy and simply ambitious. I submit that any individual with goals and dreams should take the care and time to do things properly. If not, be prepared to face the consequences associated with catastrophic outcomes.

Note: there are no assumptions being made with respect to Nikes engineering and production of the sneaker that failed Zion. Instead, the failure, the grandeur and circumstances surrounding the incident provide an excellent analogy for the world we live in and what we all face with respect to the world and our individual brands.

Fyre festival. Pronounced -: “Fire” festival, had a name which almost seems predictive in hindsight. The dual meaning evokes the potential and the reality of what is now history. With relatively little effort a very young, very talented staff a festival organizers and promoters were able to convince several thousand extremely well resourced people to spend what amounted to several million dollars. All without providing the level of detail required for a humble payday loan. Ultimately, the festival’s failure has led to documentaries, cultural commentary and a prison sentence for the chief architect. It is beyond the scope of this article to judge or analyze Billy McFarland’s motivations or the motivations of all involved with Fyre. However, there are lessons that we can all take from the folly.

Among the many threads of wisdom sewn through the fire saga, rushing to get things done shines brightly across the tapestry of mistakes. It’s easy to label this as a millennial failing but in reality, the festival was a multi generational effort and by all accounts, Billy was cautioned by both peers and mentors alike with respect to the dangers and pitfalls associated with his hurried approach. Furthermore, the urgency of fire festival was self imposed. As a result,  alternatives and opportunities to make key adjustments were ignored largely due to a desire to meet a schedule that didn’t have to be. Any fair-minded person would hope to see a successful outcome to what seemed like a very fascinating idea. But one cannot help but wonder if success in this instance would’ve actually done more harm than good. How many times are teams asked to make the impossible possible? To an extent this approach was/is celebrated–across industries and cultures. Unfortunately, the result of these fire and brimstone approaches has also left us with high levels a systematic failures, unethical practices, invasions of  privacy, and a world that is vulnerable to the whim and will of a few but extremely powerful group of bad actors.

It’s also cheap and lazy to dismiss this paradigm as human nature given that it is also well within our humanity to improve and make ourselves better. Wrapped in the failure of Fyre is the destruction left in its wake. Millions of dollars lost, friendships destroyed, lives destroyed and a wonderful concept perverted because thought and consideration were not regarded as important or reflective of positive mindset. As individuals many of us feel this invisible pressure to keep up in a race that simply does not exist. Our incomes, credit scores, sex, race, and other limitations act as barriers against lofty goals that may not even be representative of what we want for ourselves. Ironically, the vast majority of these aspirational achievements often cannot be attained without meeting several key requisites with time toping almost every dreamer’s list. It takes time to build the right credit history. It takes time to save up enough money for a down payment. It takes time to get good at your job so that one day you can become the Chief Executive Officer. Yet, we allow ourselves to be influenced and whipped into  participation and the perception of being chased by an invisible pack of wild dogs. There are no invisible dogs and the power of influencers (social media and otherwise) comes from what we give to them – not what they give to us. As a result, we should all take the time to consider what we’re doing before spending our very precious brand equity on all manner of mirages.

Multinational corporations like Nike may have a grasp of marketing, trends, pop culture and technology but that doesn’t mean that they can see and predict everything. For instance, who could predict that the boss of Amazon would have to carve out time from literally ruling the world to defend himself from cyber bullying and extortion. Yes, the world is indeed rapidly changing and while unavoidable, managing change is exceptionally difficult – at best. Instead, it’s significantly easier and far more attainable to focus on a core set of competencies while simply staying open to change. This is why doing what you do best can be incredibly important and rewarding.

Without having a firm foundation to stand on, you are left at the mercy of an ever-changing world. Adaptation is also necessary for growth but if you can add value based on a key set of strengths, you can survive. So did Nike mess up? Was the production and engineering of the PG 2.5 rushed? I hope not. But those who remember can certainly confirm that Michael Jordan insisted on the very best in material, design, workmanship, engineering, and production for a brand that is easily one of the most successful in both sports and fashion history. Jordan certainly placed a premium on doing things properly.

The impact of doing things properly can be calculated to billions of dollars in value but more importantly, each of us as individuals are a part of that value – which makes us potentially every bit as valuable. That kind of worth should be protected carefully and painstakingly protected. In this country, we also have the freedom of choice which means we can make careful decisions about who we give are very valuable business to. As major corporations evolve – some for the better, it becomes more important for us take our interactions with them seriously. In addition, we should also hold them accountable for their core competencies as society holds us four ours. We should also be very wary when the corporations that we rely upon stray outside of their core competencies  while asking us to pay a premium for their new offerings without any liability for failure.

If Apple’s core competency is design, should Apple be offering services? If Facebook is a networking and engineering firm –should it be in the advertisement business? If AT&T is a telecommunications company–should it be in the streaming video business? As consumers we should all be asking ourselves these questions – if for no other reason but to ensure we get our money’s worth. When corporations make mistakes, we are expected to understand the the jaw-droppingly lenient sentences and punishments but when we make mistakes, the consequences too often tend to be significantly disproportional to our means and offenses. There’re no absolutes in justice but in reality, we tend to get as much justice as we can afford.

In the same sense, we live in a the time where massive success can be obtained relatively easily – propelling ordinary people to very lofty heights. Unfortunately, this rapid ascent leaves a void that preparation and time should fill. In this world stars are born on a daily basis but even more fall at even higher frequency.  So if for no other reason, take the time to protect your position so that you can grow properly. Thankfully, second chances still exist and Zion should be able to resume what promises to be a storied career – something that with time and proper effort, we can all have.