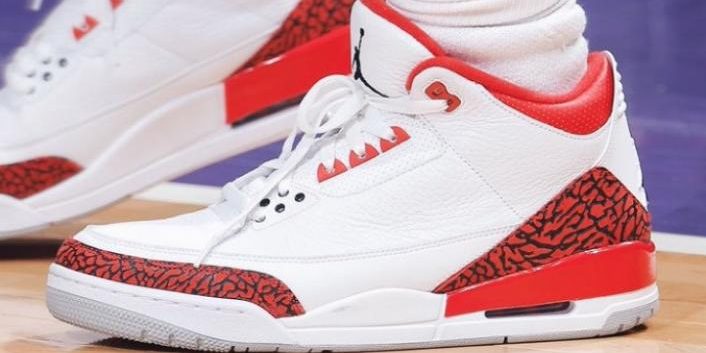 Chris Paul and the Houston Rockets closed out the NBA regular season with the best record in the league of 63 wins and 17 losses, while James Harden was able to take home the regular season NBA Scoring Title, and are set to play the Minnesota Timberwolves in the first round of the NBA Playoffs beginning this Sunday, April 15th.

In celebration of the end of the regular season, the Jordan Brand ambassador decided to lace up a sneaker outside of his brand new Jordan CP3.XI silhouette that he’s been rocking as of late and hit the court in a never before seen, Air Jordan III ‘Red Cement’ PE.

The sneaker features a white tumbled leather base complete with ‘University Red’ detailing that hits the sneaker’s tongue/sock lining, ankle collar, synthetic lacing eyelets, midsole, and of course, elephant print textured mudguard while the sneaker is closed out with a light grey rubber outsole.

With this year being a commemorative year for the Air Jordan III, Jordan Brand plans on releasing several more colorways of the coveted silhouette throughout the year and we could possibly see this sneaker hitting shelves in the near future. With that said, let us know if you’re feeling the ‘Red Cement’ Air Jordan III in the comment section.