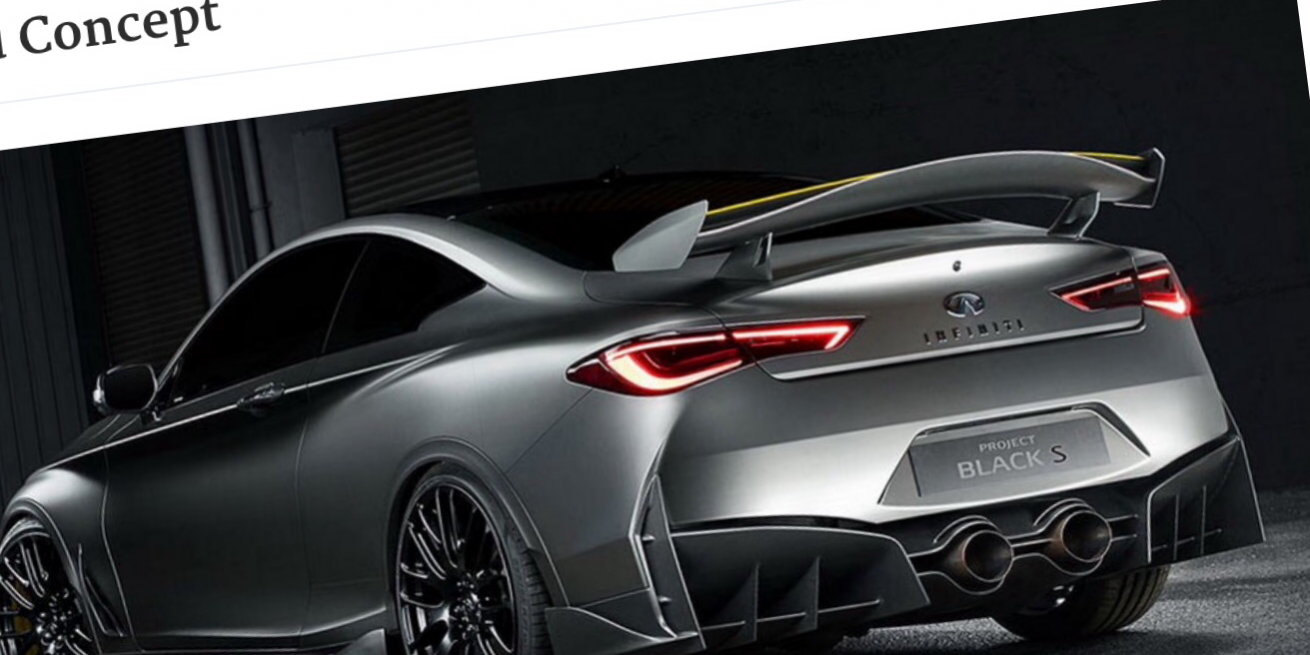 The new Infiniti Q60 is a fine and handsome luxury coupe with a surprising amount of everyday power, but it lacks the level of insanity you can get from AMG or M. But with on the Q60 Black S concept, Infiniti is infusing some F1 technology from their Renault racing team to make a 500 horsepower hybrid monster that looks very serious.

There’s a problem that most automotive journalists experience when constructing reviews: few new…

The average American Infiniti buyer may be a bit confused as to what this Q60 has to do with Formula One racing. The quick version is this: Infiniti is owned by parent company Nissan who is part of a global brand known as the Renault-Nissan Alliance, who fields an F1 car under the Renault name.

Infiniti has a “technological partnership” with Renault F1, and while it feels like more of a marketing thing to make them feel on par with Mercedes or whoever, it may just bear fruit if this thing becomes real.

The concept takes the basic Q60 and cranks up the aggression to the max. The body kit is carbon fiber with flairs and wings wherever they could stick them. The car sits on with massive 21-inch wheels and “blued titanium” tailpipes to make a vehicle that would look perfectly at home in a Need For Speed video game.

The powerplant is still under development, but Infiniti hopes to pair the current 400 HP 3.0-liter twin-turbo V6 to hybrid Kinetic Energy Recovery System or KERS, similar to what is found on F1 racecars and ultra-exotic hypercars such as the Porsche 918 Spyder and Mclaren P1. Basically, KERS takes the kinetic energy lost during braking and stores that energy in a flywheel. When extra power is needed the energy in that flywheel can be tapped for an electric boost of power. Infiniti is aiming for a 500 HP output once the turbo V6 motor is combined with the KERS.

If the car reaches production it will be the first sports car with F1 KERS technology at a somewhat reasonable price.

Of course, we’ve been burned before by Infiniti and its bonkers concepts. The Q50 Eau Rogue was a GT-R powered super sedan that never made it into production, even when they had F1’s Sebastian Vettel whipping it around a track like it was real.

The Infiniti Q50 comes up short in a few areas. When Patrick drove it, he said it lacked soul,…

Let’s hope Infiniti is actually able to deliver the goods on the Q60 Black S. Stop teasing us and do it, brand!