How To Throw Your Video Game Controller 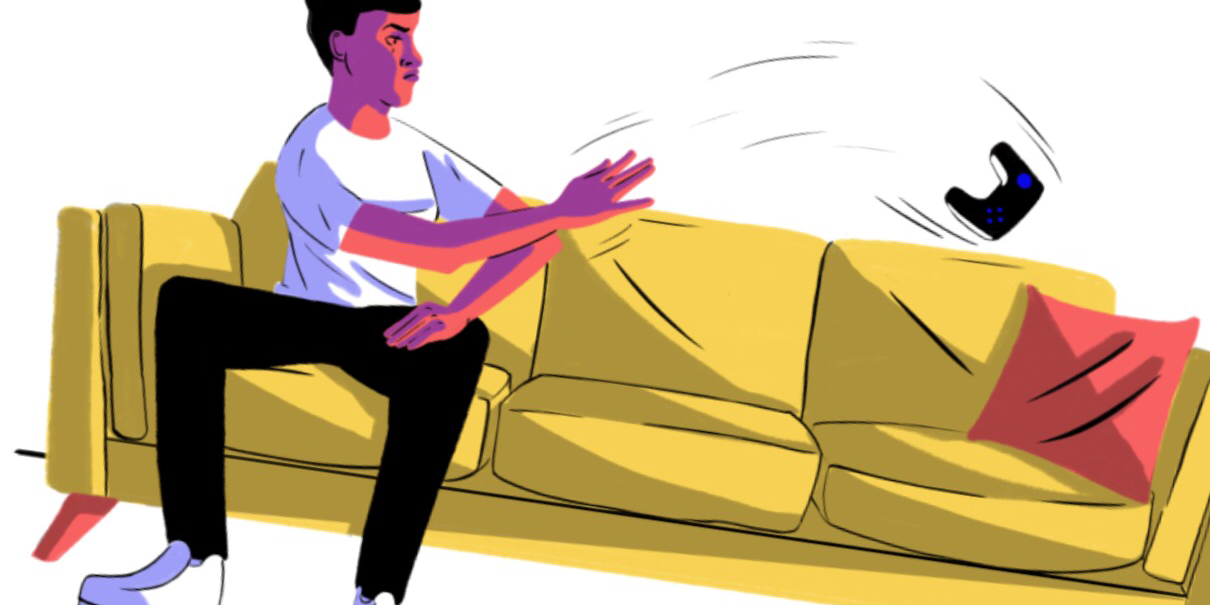 How To Throw Your Video Game Controller

Video games are a lot of fun, but they can also be frustrating. From time to time, you may even get frustrated enough that you want to throw something. Good news! Your controller is right there in your hand.
I’ve often heard people refer to a game as “controller-throwingly difficult.” This is an evocative description, but it only tells part of the story. Video games are not defined according to a throw/no-throw binary. They exist along a spectrum of frustration. Likewise, there are many degrees of video game controller-throw.

With help from illustrator Kevin Whipple, I have outlined a collection of the most common techniques. They are arranged in order of escalation.

Shake the controller forcefully but keep it safely in hand. Carefully set it down and take a break. Alternately, mash all the buttons for about one second instead of shaking.

Raise the controller up in anger. Start to bring it down on a surface in front of you, then catch yourself short and firmly set it down instead.

This time, do not catch yourself. Slam the controller onto your desk or coffee table, not quite hard enough to break anything.

Briskly slam your controller onto the desk or coffee table three times, then firmly set it down in disgust. There is no double slam. You will either slam once or three times. Low to moderate chance of damage.

Exasperatedly toss the controller onto the floor, rather than the couch. The couch is too good for your controller. It deserves to be on the floor. Moderate chance of damage.

Perform a direct overhand pitch into the wall. High chance of damage.

Perform a direct overhead pitch at your television screen, aiming for whatever boss or other challenge it was that most recently defeated you. Medium chance of controller damage. High chance of television damage.

Throw your controller directly into your console, knocking it to the floor. Walk over and, while standing, projectile vomit directly onto the console until it stops working.

Build a tiny controller-sized coffin. Get a shovel and drive to an isolated spot several miles out of town. Dig a small, deep hole. Put a fresh set of batteries into your controller and turn it on. Place your controller inside the coffin and bury it alive.

Use your telekinetic powers to lift the entire console apparatus into the air, then slam it into the wall. Hold it in place as you summon the force of will to blast it into the dark oblivion of an alternate dimension.

Withdraw all the money from your savings account and stack it on top of the controller, then set it on fire. As you breathe in the smoke, conference call your boss and significant other and tell them both to go fuck themselves. Calmly walk from your house as the fire spreads to the carpet and drapes. Take a photo of the blaze from the street and post it to social media with no added description or context. Drop your phone into the nearest drainage hole, pick a direction, and start walking.

I hope this guide has helped you find the controller throw that’s right for you. And remember, if you’re feeling frustrated, you can always take a break! That boss fight will be there when you get back.

Pokémon Go’s first real-world event was a disaster, and everyone was refunded
July 28, 2017