48 hours with the Nintendo Switch 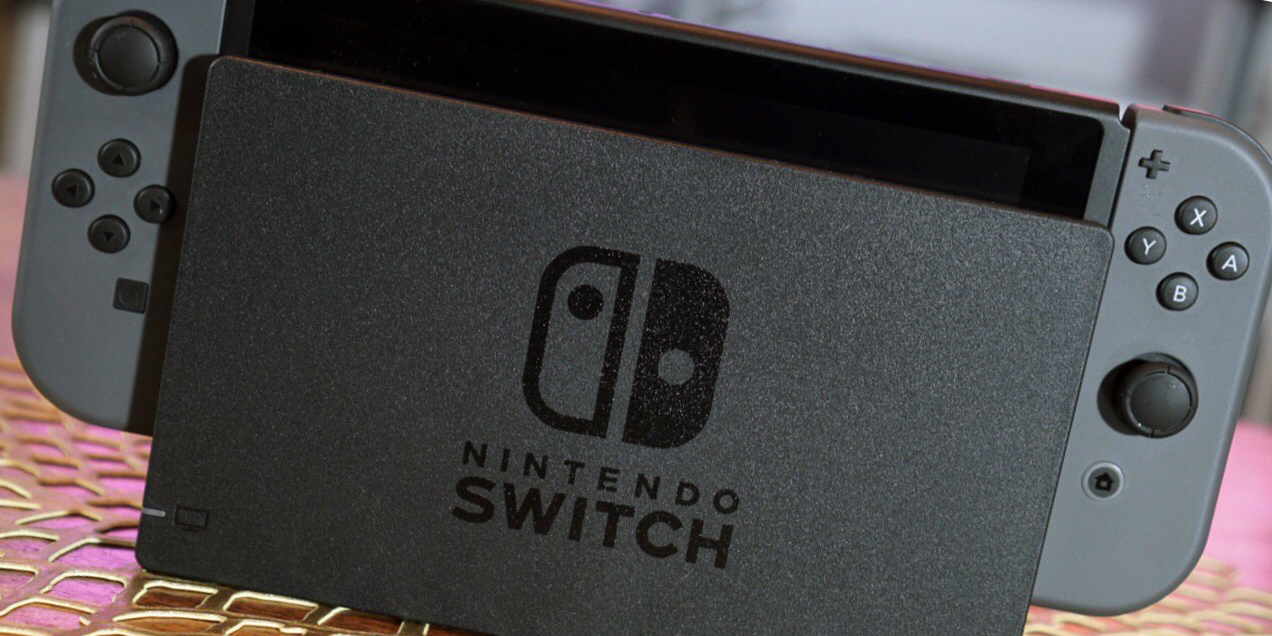 48 hours with the Nintendo Switch

Even though I’d already had a chance to play the Switch at preview events, I was still excited to get it up and running at home. Nintendo holds a particular place in my geek heart; the NES was my first true technology obsession, and most of my childhood was spent plopped down in front of the TV playing games with my brother and friends. So, in many ways, opening up the Switch reminded me of getting my hands on the NES and SNES for the first time. It wasn’t just nostalgia; it was the feeling of expecting something completely fresh from Nintendo.

The Switch makes an odd first impression. It looks more like a lopsided tablet than a game console because, well, that’s what it is. At its core, it’s simply a very powerful slate with a customized version of NVIDIA’s Tegra X1 mobile processor inside. Most of the time, you’ll be holding it with the two Joy-Con controllers attached to its sides, which makes it a bit awkward to wield with one hand. That’s not much of a problem, though, since it balances nicely when you’re gripping it with two hands like a game controller. The tablet portion of the Switch looks like a nondescript Android device from the front, but once you get it in your hands you’ll notice it’s pretty thick (15.2 millimeters) compared to today’s mobile devices. At the top there are volume and power buttons, a headphone jack, and a Game Card slot. Nintendo gave up on optical discs for this console — they really have no place in a semi-portable device — and is instead relying on tiny cartridges that look a lot like 3DS and DS cards. There’s also a small vent for the system’s heatsink at the top, which emits a bit of warm air when things get busy (you can hear the low hum of a fan if you put your ear up to it).

At the bottom of the Switch is a USB-C port for charging and a pop-out kickstand. The console comes with 32GB of storage, but you can also expand it to your heart’s content with microSD cards, which plug into the slot hidden underneath the kickstand. Nintendo is no stranger to unusual controllers, and the Switch’s Joy-Cons certainly continues that trend. On their own, they look like two miniaturized gamepads with analog sticks, four face buttons, two buttons along the sides and two hidden buttons along their flat edges (which are only visible when they’re disconnected from the Switch or a Joy-Con Grip). The Joy-Cons also differ slightly depend on their orientation: the left one has a minus button next to the analog stick and a tiny flat button for taking screenshots quickly. The right controller, meanwhile, has a plus and a button for getting you back to the home screen.

While odd, the Joy-Cons are clearly part of the Switch’s magic. They’re Nintendo’s most versatile gamepads yet: When connected to the console they serve as solid portable controllers. But when they’re attached to the Joy-Con Grip, they mimic a more traditional game controller. You can also use them separately in each hand, which could be useful when you don’t have much space to work with. And finally, you can hand one off to a friend to go head-to-head in a multiplayer game. The latter mode will undoubtedly take a bit of getting used to, but a tiny and uncomfortable gamepad is better than none, right?

It doesn’t take much to get the Switch up and running. Soon after you turn it on, you just have to log into a WiFi network and setup a user account. You can choose from a handful of images for your account, or if you’re not tired of Nintendo’s tiny avatars yet, you can create a Mii from scratch, pick a pre-made Mii or transfer one from an Amiibo. If you’re setting it up in handheld mode, the console eventually prompts you to continue the process on a TV, but I chose to do that later.

You’re also instructed to remove the Joy-Con controllers from the side of the slate, which involves hitting their release buttons (located below the triggers) and pulling up. That’ll likely be the trippiest aspect of the setup process for new users, since you can still control the console when the Joy-Cons are held separately in your hands. Anyone who’s used to the Wii’s controller and nunchuck combo should get used to it quickly, though. The Switch’s most unique feature is its ability to instantly switch between portable and TV gaming modes. To connect it to your TV and charge the console, you just need to drop it into the Switch dock. That device, which comes in the box, houses connections for power and HDMI, as well as a USB 3.0 port. The dock doesn’t look like much — it’s basically just a hollow plastic tray — but it serves its purpose. Connecting and disconnecting the Switch is painless, since the tablet just slides right in. Nintendo also built in a small tray that routes the cables through the back of the dock, which is a nice touch for neat freaks.

The Switch’s home screen is fairly simplistic at this point. There’s a marquee for the games you have installed, and on the bottom of the screen there are icons for news, the Nintendo eShop, a photo album, controller configuration and settings. The news sections seems like it’ll be a useful tool for keeping gamers informed, but unfortunately the eShop and the Switch’s online features aren’t available for testing yet. Nintendo says we’ll have access to them closer to the console’s launch, but that’s not exactly heartening news when March 3rd is only a week away. The only game I was able to test was a physical version of The Legend of Zelda: Breath of the Wild. It felt a bit odd plugging a cartridge into a flagship Nintendo console once again — I thought I was done with that in the ’90s. I got over that initial weirdness when I remembered why solid-state media can be so great. Zelda launched in around five seconds, and there wasn’t any lengthy install process to sit through. Yes, that’s technically the same experience we had decades ago, but it seems almost utopian after the long installations and loading screens I’m used to from the Xbox One and PlayStation 4.

I can’t say much about Breath of the Wild yet, but I can confirm that it is very much a Zelda game, albeit one that doesn’t look like anything you’ve seen before. Notably, it also performed a lot better than it did at preview events, where I noticed stuttering and occasional slowdown while it was connected to the dock. I wasn’t expecting much from the Switch’s graphical capabilities, but there are plenty of moments where Breath of the Wild is just strikingly beautiful.

The game worked equally well in TV and portable modes, and I never had any issues switching between them. And if you were wondering how much portable Zelda you’ll be able to play at once, I’ve got a disappointing answer: 2.5 hours. That’s not a huge deal if you’re gaming around the house, but if you’re going on a long trip you’ll want to consider some backup power options (luckily the Switch can charge over any USB-C cable). I typically relied on the Joy-Con Grip, which comes with the Switch, while gaming on my TV. It’s basically a plastic shell that the Joy-Con controllers slide into, and it transforms them into a something resembling a normal gamepad. I had my reservations about how well it would work, but the Joy-Con Grip ended up being a solid way to enjoy Zelda. The analog sticks were smooth and responsive, and even though the face buttons are a bit small, they feel good when you actually press them down. The only downside is that you don’t get a true directional pad when using the Joy-Con Grip.

Nintendo also has a Joy-Con Charging Grip available separately for $30, but I think most people will have no problem manually charging the controllers by plugging them into the slate while its docked. For hardcore gamers, there’s also the Switch Pro controller. It’s a lot more like a traditional gamepad, and it’s certainly better than Nintendo’s Wii and Wii U iterations, but at $70 it’s probably too pricey for most.

When it comes to the display, the Switch is a huge improvement over the Wii U’s dim and grainy gamepad. At 6.2 inches, it’s the same size as the Wii U display, but it sports a much sharper 720p resolution. While the display was bright and bold indoors, it didn’t fare well outdoors. It was no match for sunlight of any kind, and the screen’s high reflectivity was an issue even when it was cloudy. I had a hard time making out anything during dark portions of Zelda, and I couldn’t see myself actually enjoying the game even when I could see what was happening. This is one issue that could really hurt the Switch: Nintendo is selling it as a console that you can take outside to play with your friends. But what good is it if nobody can see anything? The best thing I can say about the Switch at this point? It let me live my dream of seamlessly moving from gaming in my living room, to gaming in bed. Sure, it’s a different experience playing Zelda on my 55-inch OLED TV with surround sound than it is playing on a tablet. But sometimes, you just want to be lazy. And I can imagine it being very useful for people who want to play games, but don’t always have time to sit on their couch. Now you can enjoy console-quality games practically anywhere — as long as you avoid the sun.