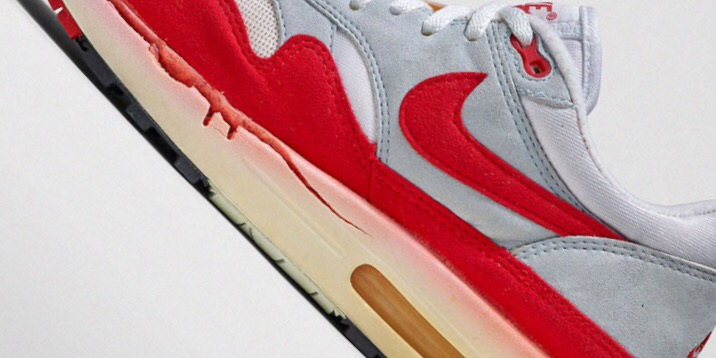 If you’re a fan of Highsnobiety, you’ve likely heard of the living legend, Tinker Hatfield. If you haven’t, rather than shit talk you, I’ll simply say that you’re in for a treat.

Point blank, Tinker Hatfield is the most influential modern sneaker designer. He gave the world some of the most influential and groundbreaking sneaker designs of all time (Air Max 1 and its iconic Air bubble, Air MAG, various Air Jordans, Huarache, etc.), completely revolutionized the way people viewed sneakers and sneaker culture, and probably saved the entire Nike brand once or twice along the way.

In no uncertain terms, Tinker Hatfield is an absolute legend—not just in the sneaker world, but with fashion designers everywhere.

Hatfield is one of the eight innovative artists and designers profiled in the new Netflix series Abstract: The Art of Design. The series follows a similar style to Chef’s Table, where the artists get a from-the-top-down profile that discusses their lives, their most innovative works, and their professional (and personal) accomplishments.

When I learned Tinker Hatfield was among the designers being profiled, I knew that he was going to offer the world some incredible advice. Rather than make you guys sit through it (although you definitely should see it for yourselves) I went ahead and combed through his episode to see what I could glean from it all.

Here are 10 Lessons I Learned from Tinker Hatfield’s Episode on Abstract: The Art of Design:

As Tinker Hatfield’s episode opens, we see him on the beach with his surfboard, prepping to hit the shores. We hear a monologue in the background. It’s Hatfield, talking about how the human feet, while resilient, were designed to do basic things like walk, run, and climb—but that’s it. The beatings modern athletes put their feet through far exceeds their original uses, which is why Hatfield’s number one priority is to help “make these very capable natural instruments perform even better.”

There’s a lot that goes into creating a beautiful finished product, but for Hatfield, a shoe’s ability to perform seamlessly and without fail is paramount to anything else.

Perhaps one of the most interesting things about Hatfield’s career is how he got his start. He didn’t study fashion or design during his tenure at The University of Oregon. In fact, Hatfield was an architecture student (who would even go on to get his architectural certificate—no easy feat, in that field) and all-American athlete. There, he ran track under Nike Co-Founder Bill Bowerman (I know, right…).

After a career-ending pole-vaulting accident, Bowerman engineered a set of track spikes with a heel lift on one side to help Hatfield train through his acquired limp. Hatfield said the experience helped him understand the consequences of injuries, which he remembered throughout the rest of his career.

His work under Bowerman eventually led to his job as Nike’s most successful shoe designer, and while he doesn’t say it outright, his ability to design beautiful, impeccably functional footwear comes as a direct result of his own experiences as an athlete.

There are several points in the episode where Tinker Hatfield discusses technology’s influence on his design work. He goes over his work designing Marty McFly’s legendary and equally mythical shoe in the Back to the Future movie franchise, and how over the years, technology allowed that concept to evolve into the Nike MAG.

He also discusses how he thinks his innovative tech idea E.A.R.L. (Electro Adaptive Reactive Lacing) is going to completely change the way athletes compete with one another.

Tinker Hatfield doesn’t deny that there’s a lot of artistic flavor that seeps into every design. He does, however, make it a point to note that this artistic flavor shouldn’t be injected into the product by the designer, but rather by the people for whom he or she is designing.

Hatfield explains that when he’s designing a shoe, he removes all personal individual artistic expression from the equation, because he realizes the product isn’t about him. It’s about helping answer a question for someone else.

Save the self-expressiveness for something else; shoes are about your buyer.

One of the coolest scenes from the episode (in my opinion, at least) is when Hatfield actually opens up one of his sketchbooks and talks viewers through his conceptualization process.

He starts on one page, with a picture of stars and planets and space. He shows us a doodle of George Jetson and an old VW Bus. On another page, he shows us a sketch of a cheetah foot embedded into a sneaker… It sounds pretty all over the place, and it is. But then, Hatfield starts to show us how the design concepts slowly narrow down and eventually come into focus as applicable features for a specific shoe.

For Tinker Hatfield, it’s all about stream of consciousness.

When it comes to a business like shoes, where everything is always so incredibly competitive and brands and designers are always trying to invent the next game-changing innovation, it’s important to be as different as you possibly can.

Hatfield discusses the 1980s aerobics craze, and how Reebok wound up capitalizing on that market so well that they, for some time, surpassed Nike in sales and growth. He talks about how it was a difficult time for Nike, and how he was essentially thrown into the design department there—where he thrived.

A perfect example is the Nike Air Max 1. It was marketed as a shoe that literally made it possible to float on air, due to its visible air cushioning unit—an innovation in design the world had never before seen. In fact, it was such an impressive innovation that it led to a complete resurgence in running. One that Nike capitalized on from that moment forward.

Although you’d be hard-pressed to find any kind of creative who’d say that being a disrupter is a bad thing, Hatfield stresses the importance of really making people uncomfortable and pushing the boundaries as often as possible.

Springboarding off of his success with the Air Max 1, Hatfield discusses how people were so angered by the design that they were trying to get him and his team fired for their work on it. Lo and behold, to this day, it is one of Nike’s most popular shoe models ever, and has become a brand staple.

Hatfield says, “People struggle with stuff they don’t understand [and] design that’s different than what they’re used to. Yet, what creates excitement and gets people to pay attention—and may actually lead to some breakthroughs in performance—is to kind of force the disruptive nature of like, ‘Whoa, that’s a big idea!’ That’s what I do. That’s my job.”

The episode covers Tinker Hatfield’s time spent working on Andre Agassi’s Air Tech Challenge 2’s back in 1990, and how the whole concept revolved around Agassi turning the tennis world on its head.

Hatfield remembers how it emerged to him that Agassi wasn’t the kind of person who grew up playing tennis in country clubs, and that he was a young, rebellious kid with a mullet, who didn’t wear plain white nerd getups or play like someone with a stick up their ass. Agassi was young, loud, aggressive and—most importantly—incredibly talented. So, he used Agassi’s persona in designing not just the shoes, but the supplemental outfit.

“It was absolutely meant to be anti-tennis,” he says. “I coined the phrase ‘anti-country club’, because it’s not always just about the shoe design. If you have an athlete with the right personality, you can challenge the perception of the entire sport.”

Agassi made tennis punk as fuck, and Tinker Hatfield helped him do it. When designing your products, don’t be afraid to be that person.

One of the other nuggets of advice comes when Hatfield’s discussing his work on the Jordans. He talks about how he was watching Michael Jordan play ball one day, and he noticed that Jordan was just kind of floating around on the edges of the court, swooping in when he had to, ducking dipping and diving with agility and speed.

Likening Jordan’s movements to those of WWII fighter pilots, Hatfield explains that he started thinking of fighter plane designs. He remembered all the intricate plane nose designs he’d seen in all the history books and, in an effort to translate that historical relevance into his design for the Jordans, that was where he got the idea to include some backwards flames on the sides of the shoe.

As everyone knows, the flames were cut from the final design, but just the idea which shows the kind of mental and creative flexibility that Hatfield brought into the design room with him is just… Eye opening.

Tinker Hatfield is probably one of the most complex creative beings on the planet. He’s an experiencer. In this short 45-minute episode, we see him surfing, drawing, playing an organ, land surfing, sea surfing, riding a Vespa, tinkering with his VW Bus—the man just loves doing new things.

And at the end of his day, his visceral need to experience the world and everything in it is what provides him with the creative library he needs to keep innovating and rejuvenating his work.

Frankly, he says it best: “Just get out there and experience life. That just gives you the library in your head to then translate into unique new design work.”

Now that you’re familiar with Tinker Hatfield’s design principles, check out our interview where he discusses Nike’s revered HTM line.