Can Lebron Ever Surpass Jordan In Fame Or Accomplishments? Let’s Ask Wade. 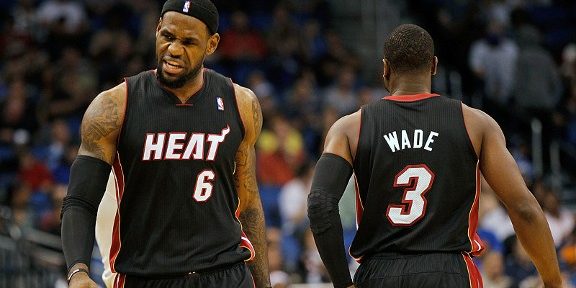 One of basketball’s more recent power duos was Dwayne Wade and Lebron James. The stand out success being compared to Michael Jordan is Lebron James. Without a doubt, Michael Jordan is the greatest of all time and the mark he left is what every other hopeful is being compared to. Lebron has made a nice dent in the NBA viewing community and the shoe crew too. With his constant advancement seeming unblockable many fans wonder if James can reach or topple Jordan’s record.

The question was brought to Dwayne who simply says, that’s impossible. The two guys have 2 rings that they earned together and a mutual respect so we know the answer is just the honest opinion of a man that knows these things a lot better than us. The reality is, we will see.